Users now have the ability to fully customize the Ribbon Interface.  You can now Add and Rename Tools, Groups and Tabs.  In addition, Tabs may be hidden or renamed, and manually created XML Config files can be directly imported into TurboCAD. UI Themes are also fully supported in the Ribbon, 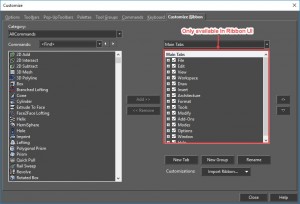 In Customize Ribbon, the following options are available

Add: Adds a selected tool into the tab that has been selected. 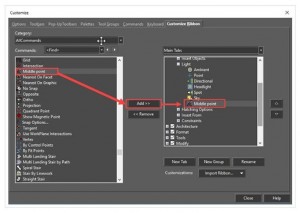 Remove: Removes a selected tool from a tab. 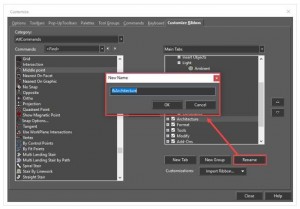 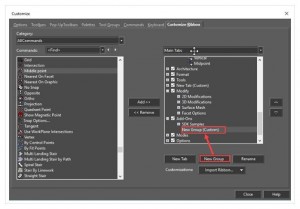 Hide Tab:  Unchecking the tab will hide tab from the Ribbon. 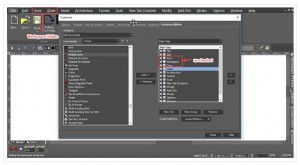 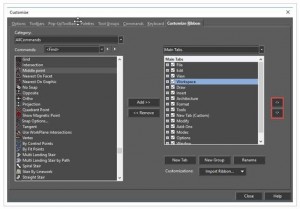 Reset All button performs the same function of ‘Set Default’ but for all fonts. This option is available in: Customize > Style and Themes > Reset All 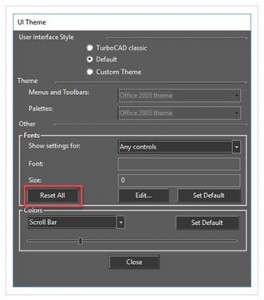 With new, scaleable vector icons, TurboCAD is now fully optimized for 4K monitors. Through dynamic sliders, toolbar icons, the User Interface and other icons in other part of the UI can be resized to optimize readability on higher resolution displays. 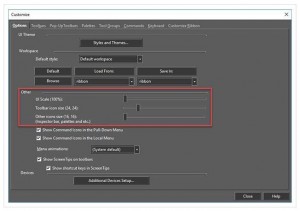 A new checkbox added like “Don’t show this message again” in the dialog “Confirm Replace”. If the user ticks the checkbox the program will remember the last selected option and will not be shown the dialog again. This dialogue can be enabled again through Warning Dialogs in the Options menu. 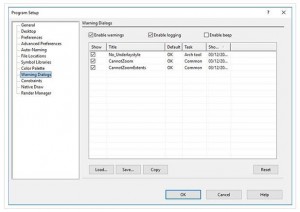 * Corresponding event is sent to the Event Viewer palette.

The Ribbon now supports Themes such as Classic, Default or Custom.

The following changes have also been made:

– Changed docking place to the top of the application window (not Document window). Doing this gives the Ribbon UI more space for controls. 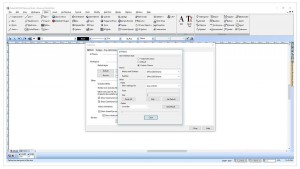 New functionality has been added where users now have the option of associating Layer Sets with Named Views, giving users a much better way to manage Layers Sets. 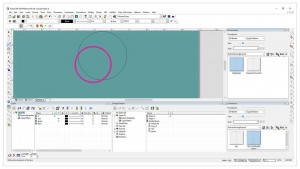 Associating a set of layers with Named Views

New functionality where you have the option of associating set of layers (Layer Sets)  with Named Views. In addition to giving users a much better way to manage Layers Sets, this new feature lends itself to easier Viewport creation.

TurboCAD 2019 Platinum and Pro only

A powerful new tool that allows you to select any 2D or 3D object type or a Block and then find all occurrences of that in the drawing.  Very detailed selections can be made that include parameters such as pen color and style, brush color and style, layer, even the selected object’s coordinate system. A great tool to use in conjunction with making further global changes to that selected object. 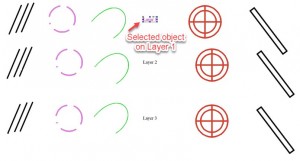 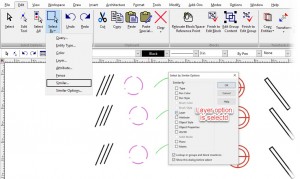 Result: All the objects that are on the same layer as the selected object will be selected automatically. 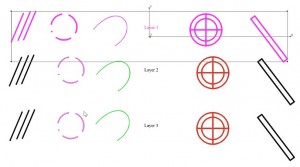 Note: This command is only accessible after you have selected an object.

The PDF Underlay tool allows you to insert a page of a PDF file into your drawing to use as a reference or tracing layer. To use properly as a tracing layer, the file must be a vector PDF, rather than a bit-mapped PDF. As a vector file, you will be able to snap to the endpoints and midpoints of lines in the PDF underlay.

Underlays consist of two parts: the underlay style and the underlay insertion. Before inserting an underlay, you must first create an Underlay style, which is done through the Underlay Manager, found in the Tools menu of the Default interface, and in the Format menu of the Ribbon interface A new tool “PDF underlay to Objects” has been implemented. It gives the ability to convert an Underlay into an editable object. 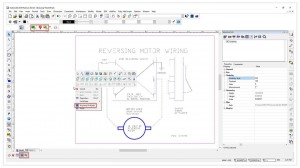 A new local menu item “Highlight end points” (On/Off) has been added to “Edit” tool. This item is available for the following object types:

The item is enabled if the selected graphic is non-closed and if vertex count > 2. If “Highlight end points” option is ‘on’, then endpoints are marked in red.

A property called ‘Closed’  has been added to the Selection Info palette, With this property, users can determine if a Polyline is closed or not. This is extremely important when performing functions such as Extrudes and Lofts. 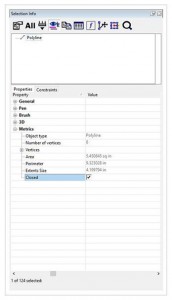 11: Trace Tools – Trace By Point and Trace By Rectangle incorporated to 64-bit

Trace tools (Trace by Point and Trace by Rectangle) are now supported in the 64-bit of TurboCAD, not just the 32-bit version.

This new ‘overkill’ tool allows the user to eliminate overlapping lines and arcs, thereby allowing for the simplification of drawings by removing duplicate, redundant entities.

Color, Layer, Line Type: select these LM items to not ignore objects properties during comparison. Event viewer shows the count of object that was changed (duplicated). 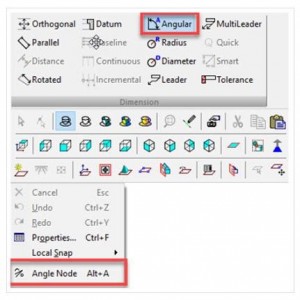 This new option allows the user to define an obtuse or acute  angle dimension based upon the user selecting a vertex point on a 2D object and then defining 2 additional points which define the angle. 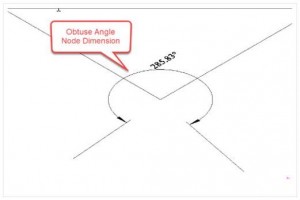 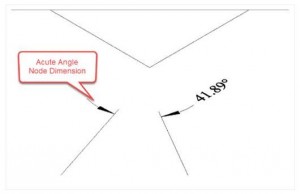 Added the ability for users to use not only Text/Numeric fields and button controls, but “combo box” controls as well. This functionality  allows users to reduce using the Tool’s Local menu and reduce Inspector bar size.

The “Construct Similar” tool takes properties from one object and applies them onto active tool. You can set an object’s properties before it is created in one click.  Analogous to the ‘Format Painter’ tool found in MS Office applications. The tool is found on the main toolbar of the program.

To use Construct Similar, first choose the Object type you wish:

Menu item is enabled if the active tool is a tool for the construction geometry (‘Draw Line’, ‘Draw Arc’ etc.).

This Hatching tool now works with gaps in 2D objects. For example,  trying to fill an area bounded by a Polyline, when there are gaps in the Polyline.  Improvements to pick-point also apply to ADT objects (Walls, Doors and Windows), allowing to similarly fill in gaps between these objects. 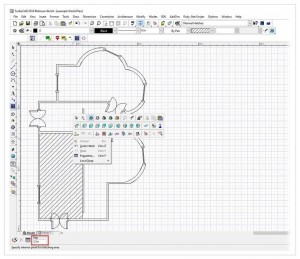 The Surface Tolerance represents the maximum distance between a facet and the true surface definition. By default this value is a predefined fraction  of the body diagonal.  However, using the Expert Faceter Parameters, you can override the default behavior and precisely control the deviation between the facet and true surface.  For example, by specifying a value of 0.05, facets will deviate no further than 0.05 inches/mm from the true surface.  This is particularly useful to remove facet display anomalies due to tolerances. 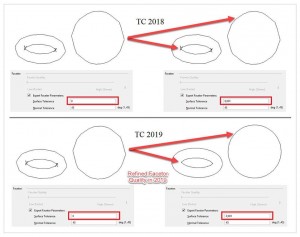 1) Curvature continuous blending to create the explicit blends. The blend surface will be curvature-continuous with both faces. To make it you should

It is single click blend. You cannot select more than one edge.

To make it you should

To make it you should 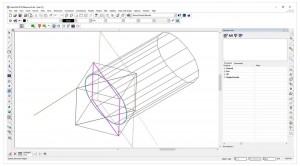 New “Flange” properties have also been added. They are disabled in Selection info palette for older (TC2018 and earlier) Part Tree nodes  but available for new Part Tree  in TurboCAD 2019.

1) Added Taper Angle: Allows users to create a flange with one or two tapered side faces 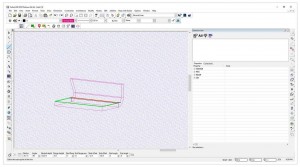 The following new improvements have been implemented in the Unbend tool:
1) Progress indicator 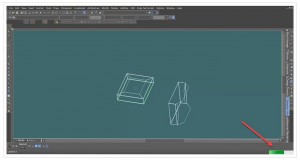 2) The ability to interrupt by pressing “esc” while building a “preview”. 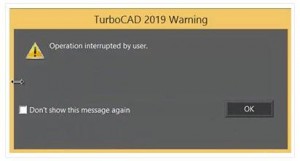 3) Greater accuracy in the “Unbend” results due to using ACIS® unbend at each step.

Architectural Desktop (ADT) objects can now be completely and accurately used with Copy and Linear Array copy tools.   For example, the Array Fit Linear now takes into account all of the properties of the ADT object being copied, including Work Plane, Layer, Materials, etc. Previously, this tool could create only one roof object. Now, multiple objects may be created.  In addition, the overall processing of all ADT objects in a drawing, including the House Wizard, has been significantly sped up. 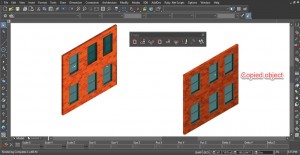 Data collection of IFC files has been improved, the BIM Palette now shows the BIM file structure, and the BIM tool and BIM Palette’s UI’s have now been more tightly integrated, making these architectural modeling parts of TurboCAD easier to use. 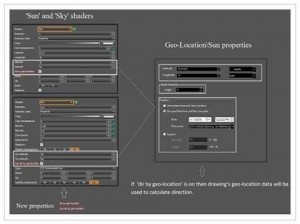 Older, RedSDK rendered images are now more accurately and completely converted to a LightWorks rendered image with improvements to this tool in TurboCAD 2019.

The final version of REDsdk 4.4 is available. It has been renamed REDsdk 5.0.

A new 3D Print Check option has been added when exporting an STL file.   This tool checks a part for the following common topological errors such as:

The tool also displays geometry information such as extents, number of facets/vertices, area, and volume. When saving an STL file, the user is given the option of performing a print check on the 3D model: 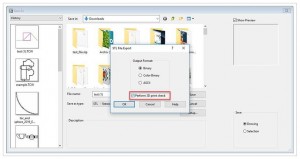 After saving the file, A dialog will appear for each object giving general information of the object as well as result of 3D print tests. Please find the attached reference images. 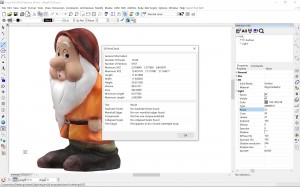