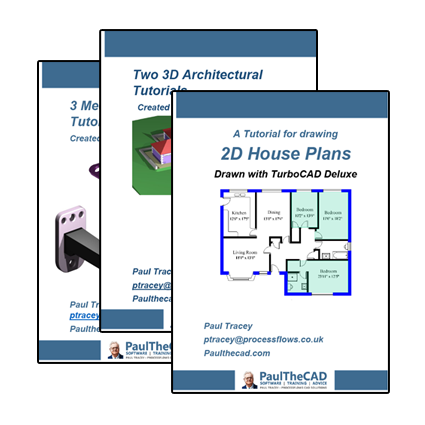 These exercises are for the PC version of TurboCAD, not the Mac versions.

Some understanding of drawing with TurboCAD will make these tutorials easier to follow. So before you start, understanding snaps, the copy tools and workplanes, (for the 3D projects), would be an advantage and you can find free films on all of these on my YouTube channel at paulthecadtracey. There are also lots of other tutorials to explain the workings of a variety of tools on the channel.

These training exercises will take you through each project in a step by step guide to produce the drawings illustrated on the cover of each tutorial. They are created in audio visual, pdf and paper form, all follow the same methods and are drawn in the same sequence, although sometimes in the films I demonstrate a few tips as they’ve occurred to me as I went along.

There is a discounted price for upgrading from Deluxe to Pro Platinum – see this page: http://paulthecad.com/product/turbocad-deluxe-upgrade/

Orders from within the UK will be posted using Royal Mail within 24 hours of the order being received. An email with links to the films and a PDF of the printed tutorials will be sent as soon as the order is received.

Orders from outside of the UK will only be delivered electronically.

While each of these three assemblies uses many of the same 2D and 3D tools, each will make use of tools not used in the other models so that by going thought all three the reader will gain a good understanding of how to create these and other 3D assemblies.

There are often various methods for creating assemblies and in the films I’ll try and explain some of these variations and reasons for my choices of tools and methods. Some will be initially drawn in 2D then extruded, others drawn directly in 3D.

For the rendering I have used a combination of materials and colours. While the colours do not show a reflection, they will still cast a shadow and I find them just as effective in creating these types of images.

I’ve used an architectural template for each of these projects and shown measurements in both Imperial and Metric units. Dimensions can be displayed as either, or both and single objects or the whole drawing can be translated from one to the other.

In the Victorian Building I have created a building with one solid wall and in the Museum project I have used a cavity wall. Both can be used in the same drawing and different styles of walls can be saved within a drawing.

Both projects include creating some 3D objects from the general 3D pallet of tools, so the tutorials will teach general 3D drawing as well as the architectural tools. These are used to draw guttering, steps, low walls and signs.

Both tutorials show how to create doors and windows and store them within the drawing, so that more can be easily added and existing ones edited.

Roofs will be constructed, edited and cut into.

Not all the architectural tools are used, but all the ones necessary to draw a building are.

All the tools and symbols used in this tutorial can be found in all versions of TurboCAD.

The tutorial is for those wishing to draw detailed house plans for planning permission, for estate agents needing to show house layouts or builders planning house extensions and similar projects.

TurboCAD can import existing CAD drawings from architects or other sources to be edited and saved in over 20 file formats, including PDF. Because of this it’s possible to send drawings to any customer or interested party.