The TurboCAD 2022 release is highlighted by the inclusion of a new Physical-Based Rendering (PBR) engine, TurboLux™, included in all of the 2D/3D versions of the product line.   includes over twenty new and improved features.  “The release of TurboCAD 2022 has a strong focus on Visualization, 3D Modeling and Architectural enhancements, as well as integration with our new in-app Content Server that contains 100,000’s of parts to speed-up design,” stated Bob Mayer, President of IMSI Design.“

“We are excited to announce the release of TurboLux, a first of its kind Physical-Based Rendering engine now available in TurboCAD Deluxe, Professional and Platinum versions. The TuboLux rendering engine addition has taken TurboCAD’s visualization capabilities to a whole new level of photo realism.  Both CPU and GPU rendering are incredibly fast, there’s hundred of additional materials, and when coupled with the other 2D drawing, 3D modeling and interoperability enhancements, we know all of of TurboCAD users will find 2022 a grat new release,”  added Mayer.

IMSI has again taken the very reliable and straight forward to use LightWorks rendering component out of 2022 and replaced it this time with something called TurboLux. This does not work, ‘straight out of the box’, is not straightforward to use and needs a lot of setting up. So, if you are not technically minded, comfortable with terms such as OCL, GPU, Open CL then the rendering is going to give you problems.

In very rare occasions TurboCAD misbehaves. The standard cure for this is a simple Default.

In very rare circumstances, the configuration INI files may become corrupted causing loss of functionality, and no amount of customizing will restore them. To fix this problem, the standard procedure is to force TurboCAD to reconstruct the “Built-in” folder by deleting it.  This will restore most TurboCAD settings to those found in a brand new installation.

drill down until you get to the “Profiles” folder, similar to this path,

open the “Profiles” folder to see the “Built-in” folder

I have been asked where to find the tools to set up sheets and print with TC Mac v12. The image below should help. 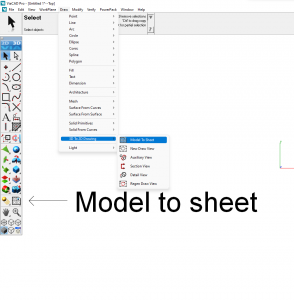 You will need TurboCAD Mac build 1591 to run with macOS 12 Monterey.

Any of my customers needing the latest 1591 build, email me with you details.

I’ve recently had a couple of customers having a problem downloading the latest TC link.

From George at IMSI Design 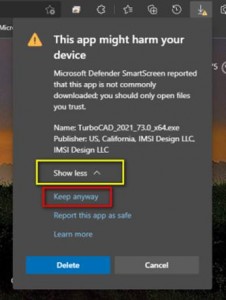 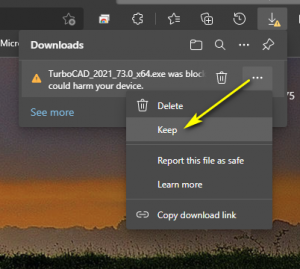 This should help you get around the problem.

Occasionally I have a customer who has trouble loading TC when they have AVG security on their computer. The advice to overcome this from a trusted technician at the publisher’s is below.

The customer should be able to disable AVG temporarily during the install of TurboCAD.

Usually works for my customers

Odd that some people use a third party AV when Windows 10 has a VERY GOOD built in anti-virus.

Notes from a trusted customer who at first tried unsuccessfully to import fonts into TurboCAD.

I searched for a font converter, thinking I would convert to SHX files. The answer is my missing fonts were OTF type. They install in Windows 10 but TurboCAD does not recognise them. TurboCAD likes TTF fonts. Convertio does the trick, it converts files. My OTFs are now TTFs, and TurboCAD is quite happy.

It says ‘FREE’, but the limit is 10 converts per day, then it tries to smack you with buying a licence.

INSTRUCTIONS for those upgrading their TC from say Designer to Deluxe, or any version to Platinum from within 2021. Below are the instructions from the publisher which I have tried and worked for me.

These steps “should” work but success seems about 50/50

If a web page pops up, close it and look for a dialog box

You might have to minimize TC to see the dialog box

Input the new license key there

From within the same version, now v12, if you are upgrading your Mac version from the trial, or from say Deluxe to Pro, follow the steps below.

2. from the TurboCAD Pull down menu open preferences and go to the registration category.

3. Copy the Pro serial key over the deluxe serial key and click apply.

4. Agree to resetting the registration and the program should close (if not he will have to close it manually)

5. Launch the program again and he will be faced with the original registration screen.  Have him register with the Pro serial key and his program will be converted to PRo.

If anyone can not either see or hear my training films, then you can download VLC, which is free and very efficient. I have only once had a customer who could not view with VLC, but he downloaded “File Viewer+4”, which did the trick.