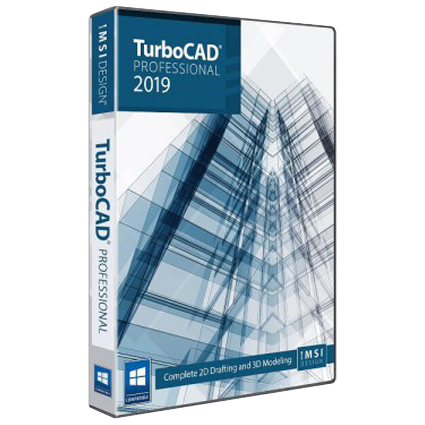 TurboCAD software purchased on this site is delivered as a link to a download. If you would like a copy of the installer on a USB drive, please look for the link to the ‘Software Backup on USB’ at the bottom of the Basket page and add to the basket from the linked page.

Architectural & GIS
TurboCAD® includes an integrated suite of architectural tools that accelerate productivity in design and drafting, or in the documentation of existing compatible architectural models. The architectural objects are AutoCAD® Architecture (ACA) compatible so that .DWG models with ACA extensions may be read, modified, and documented as needed.

Interoperability / File Support
TurboCAD® makes it easy to maintain your intellectual property investment and share your work. TurboCAD Professional 2019 supports export of 3D models to 3D .PDF which can be viewed interactively with Acrobat Reader. Plus, users can open, insert, or embed up to 35 file formats and export up to 28, including .DWG, .DXF (from R14 through 2019 including AutoCAD®2019 Architecture extensions), .SKP (SketchUp™, to version 2017), .3DM (Rhinoceros®5), .3DS (Autodesk® 3ds Max®), IGES, STEP, 3MF, FBX, .OBJ, COLLADA (.DAE – export); and many more.

External References (Xrefs)
All of the file formats that may be opened and imported, except bitmap images, may be used as an external reference (Xref). TurboCAD® offers Xref clipping for dozens of file formats and binding of Xrefs, which can then be exploded and edited. Xref layers are also easy to manage, including with layer filters.

What's new in this version

Customisable Ribbon Interface:
Users now have the ability to fully customize the Ribbon Interface. You can now Add and Rename Tools, Groups and Tabs. In addition, Tabs may be hidden or renamed, and manually created XML Config files can be directly imported into TurboCAD. UI Themes are also full supported in the Ribbon.

4K Monitor Support:
With new, scaleable vector icons, TurboCAD is now fully optimized for 4K monitors. Through dynamic sliders, toolbar icons, the User Interface and other icons in other part of the UI can be resized to optimize readability on higher resolution displays.

Named View Enhancements:
New functionality has been added where users now have the option of associating Layer Sets with Named Views, giving users a much better way to manage Layers Sets..

Select by Similar:
This powerful tool allows users to select any 2D or 3D object type or a Block and then find all occurrences of that in the drawing. Very detailed selections can be made that include parameters such as pen color and style, brush color and style, layer, even the selected object’s coordinate system. A great tool to use in conjunction with making further global changes to that selected object.

Construct Similar Tool:
This tool which takes properties from a referenced object and applies these to the construction of the next object. This tool provides a fast and efficient method to assign object properties such as line fonts, dimension styles, and wall properties with a single click.

Pick Point Hatch:
Pick-Point-Hatch now works with gaps in 2D objects. For example, trying to fill an area bounded by a Polyline, when there are gaps in the Polyline. Improvements to pick-point also apply to ADT objects (Walls, Doors and Windows), allowing to similarly fill in gaps between these objects.

Architectural Desktop (ADT) Objects:
ADT objects can now be completely and accurately used with Copy and Linear Array copy tools. For example, the Array Fit Linear now takes into account all of the properties of the ADT object being copied, including Work Plane, Layer, Materials, etc. Previously, this tool could create only one roof object. Now, multiple objects may be created. In addition, the overall processing of all ADT objects in a drawing , including the House Wizard, has been significantly sped up.

BIM Tool:
Data collection of IFC files has been improved, the BIM Palette now shows the BIM file structure, and the BIM tool and BIM Palette’s UI’s have now been more tightly integrated, making these architectural modeling parts of TurboCAD easier to use.

TurboCAD Professional 2019 is delivered in a 64-bit version to take full advantage of your hardware’s available computer memory to load, process, and render CAD files. A 32-bit version is also available if required by your hardware.

*TurboCAD® is designed for desktops or laptops that meet the indicated system requirements. Windows RT technology for use on tablets is not supported.

Recommended:
Your experience with Professional 2019 will be greatly enhanced with a newer generation, higher speed CPU, and 8+ GB RAM

I occasionally send out Newsletters and CAD Product Update Bulletins. If you'd like to receive them, please enter your email address in the boxes below.

Please be assured that I will never give your information to anyone else and you may unsubscribe whenever you wish. 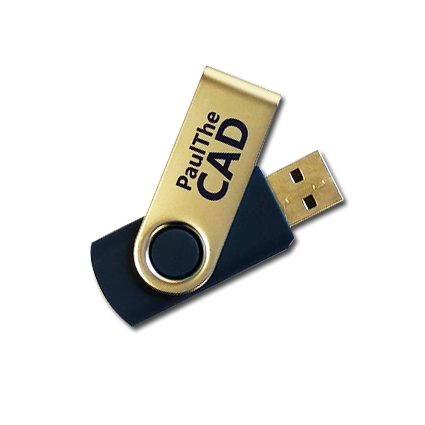 Software Backup on USB
Software purchased on this site is delivered as a link to a download. If you would like a copy of the installer on a USB drive, please add this item to your basket. There is no charge for postage. 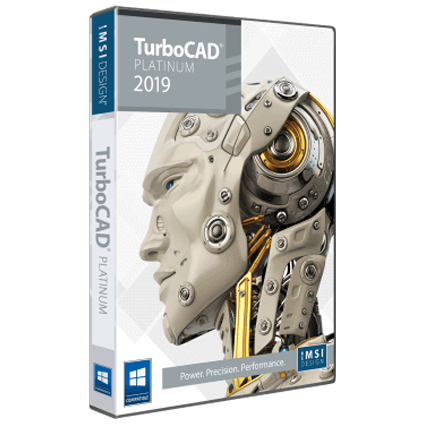 TurboCAD software purchased on this site is delivered as a link to a download. If you would like a copy of the installer on a USB drive, please look for the link to the 'Software Backup on USB' at the bottom of the Basket page and add to the basket from the linked page.